This is a tough time for all fans of the popular CW show, Supernatural. After 14 long years, it announced the release of one final season. While the journey was incredible, the ending is bittersweet. No doubt many of us will be found, curled up in our beds, listening to Carry On My Wayward Son on repeat, and watching hilarious cast bloopers. But, nothing really ever ends, so buckle up y'all as we count down our top 14 Fan Favorite Supernatural Moments From The Last 14 Seasons.

The one that started them all. The Pilot was the one that introduced people to the world of Supernatural and more importantly, the Winchester boys. In this episode we see a young Sam and Dean (Jared Padalecki and Jensen Ackles), reuniting for the first time since Sam left for Stanford. Cute guys, ghosts, monsters, a mother burning on the ceiling, a truly iconic episode. Plus, who can forget the line that made us all fall into the deep pit of obsession? "Dad's on a hunting trip, and he hasn't been home in a few days." Let's just say, we didn't leave home for a few days after watching that first episode.

One of Supernatural's earliest heart-wrenching episodes, we see Sam and Dean in the middle of a hunt for what turns out to be a werewolf. While the episode is pretty standard it gets deep when it is revealed the werewolf is Madison (Emmanuelle Vaugier), a girl Sam has grown incredibly close to. At the end of the episode we see Sam having to make the decision to shoot Madison, so she cannot kill anyone else. The episode plays at our emotions and Jared [Padalecki]'s real-life reaction is one that left many viewers in tears.

Ah the Ghostfacers, Supernatural's longest surviving characters. No matter how much we claim to hate 'em, we have to admit we love them. This episode is about as scary as a scary movie (you know, the really cheesy ones that aren't scary AT ALL). For the first time, we get to see a hunt from the lenses of a different camera. Plus, I think we can all agree, the way Sam and Dean talk in this episode, is for sure the way they really talk on hunts. Along with some of the best lines so far, this episode is a comedic relief from a pretty heavy season.

There is no doubt that the arrival of the angel Castiel, was one of the best. A fan favorite from the moment he walked on, the blunt but lovable angel has provided fans with quirky one-liners, a debatable sense of humor, and of course, a trademark fashion style. Gracing our screens as the angel who hoisted Dean Winchester out of hell, he soon rose to series regular, becoming the third part of "Team Free Will". Castiel's entrance was definitely one for the books.

A classic "Trickster" episode and a definite fan favorite, Changing Channels brought back a much-loved character to the screen. "The Trickster" (Richard Speight), known for torturing the boys with his semantics, graced our screens once again, returning to, you guessed it, make the Winchester's lives miserable. Trapping them in TV land, the episode saw Sam and Dean on a Japanese game show, performing surgery, acting in a sitcom, and of course, the legendary scene, "I've got genital herpes." A classic and hilarious episode, it isn't hard to see why this is a fan favorite. Plus, we finally find out "The Trickster's" true identity. Spoiler alert: yes, he's the Archangel Gabriel!

If you thought Changing Channels was a weird episode, just wait 'till you hear about this one. While The Monster At The End Of This Book cracked through the fourth wall, this season 6 episode blew it to smithereens. The episode features Sam and Dean being thrust into an alternate reality, a reality where their life is a TV show .... sound familiar? An absolute hilarious episode, we see what it would be like if Sam and Dean were in our universe. The episode features a few familiar faces such as Castiel (Misha Collins) and Ruby (Gen Padalecki), only now they are playing themselves (way to confuse the boys). If that isn't confusing enough for you, at one point we have Jensen and Jared, playing Sam and Dean, playing Jensen and Jared, playing Sam and Dean! Did you get all that? Side note: these are NOT bloopers.

While this list has been mainly comedic episodes, some of the best Supernatural moments are the sad ones. Loss of loved ones, pain, losing hope. In this episode, we see Bobby (Jim Beaver), a father figure to the Winchester's and a long time fan favorite, finally meeting his end. The episode is filled with memories and fans had the opportunity to see into Bobby's past a bit more. It was a heart-wrenching episode that left many of us in tears. Plus, this episode we finally get to see Dean playing catch like a normal kid! Thanks, Bobby.

SEASON 8: Larp and The Real Girl

In this absolute classic episode, we see Sam and Dean on a hunt that ends up in the middle of a Live-Action Role-Playing game, and can we guess who's there? Charlie (Felicia Day),  an old friend of Sam and Dean, and a fan favorite reprises her role as the Winchesters nerdy "little sister". While the episode itself is great, the relationships are more the central focus of it. With Charlie's perfectly timed movie references and Dean finally smiling again, this episode makes for a great watch. Oh, and we can't forget the time when Dean finally had longer hair than Sam, that's a moment we can't forget.

This episode is definitely a fan favorite and for good reason. After quite a heavy season, it was fun to take a step back and have a funny episode again. In this one, we saw Dean take a potion to help him speak to dogs, in order to solve a case in which the only witness was a dog. From shooting at a pigeon to playing fetch, this episode made us all smile. If you thought Sam and Dean's facial expressions were funny before, just you wait.

If we're talking all-time favorite episodes, this one tops the shelf for sure. The episode is about Sam and Dean answering a hunt at a high school. A high school that happens to be putting on a musical of, you guessed it, SUPERNATURAL! From quirky songs and hilarious dialogue, this episode is a big thank you to the fans. Not even kidding, you should see the look on their faces when they walk into that theatre, plus Destiel is finally addressed, about time! (Don't worry, guys, Sam is totally a shipper).

This episode brought forth one of the greatest twists in the whole of the show. CHUCK IS ACTUALLY GOD!  In this episode, Sam and Dean attempt to help a town get rid of a black mist that seems to be turning people murderous. However, they have little success and as the episode comes to an end, it doesn't look good for the Winchester's. Then he comes. During half of the episode, we see Chuck (Rob Benedict) talking to Metatron (Curtis Armstrong), telling him his "big plan". Metatron isn't impressed with God until he re-writes the ending of the story. We get an awesome rendition of Fare Thee Well, and overall, it was a nice, feel-good episode.

SEASON 12: You're The One I've Been Waiting For

Ok, while season 12 had some incredible moments (Mary Winchester & Bobby coming back), nothing was better than Dean actually killing HITLER! Yes, you heard it write, Dean Winchester killed Hitler y'all. In the episode, Sam and Dean are hunting a group of Nazi necromancers, who are attempting to resurrect Hitler. It's a funny and light-hearted episode, that is definitely one Dean will never let us forget. We are so proud of him! 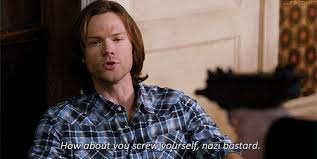 Some of the show's best female characters were put together to make this episode. It featured old favorites such as Jody (Kim Rhodes), Donna (Briana Buckmaster), and Claire Novak (Kathryn Newton). It was a fabulous episode that involved a lot of kicking butt and sarcastic comments (thanks Claire). It was refreshing to see someone other than Sam and Dean taking charge. It was funny, but it was also sad as it saw the loss of one of the rather new characters (Kaia). Plus, it was great to see the almost family dynamic between the characters.

... and finally, last but not least, the final episode of season 14. An incredible way to end it, the episode begins with Jack Kline (Alex Calvert), putting a spell over everyone, forcing people to tell the truth. It get's hilarious when a broadcast reveals the President spent two hours disclosing his tax information, deep ties to Russia and how he made a deal with the demon Crowley. While the episode is funny, by the end of it, we are all shaking in our boots. So now Chuck (God) is the bad guy, he killed Jack, and opened up hell, unraveling everything that Sam and Dean have done over the past 14 years. An ending worthy of Supernatural, fans are left with many, many questions.

That's all for today's list. Hope you enjoyed, and tune into Season 15 of Supernatural, airing Thursday, Oct 10, at 8 pm.