If you have watched the news or scrolled through social media in the past two weeks, you have probably heard about the COVID-19, better known as Coronavirus. The COVID-19 is a novel Coronavirus that is often compared to SARS. It was first identified in Wuhan, China late last year, and confirmed cases have been reported by several countries across Asia, Oceania, Europe, and North America. Symptoms include fever, coughing, breathing difficulty and it can even be fatal. This has caused widespread panic across the globe, as more than 4,673 confirmed cases with 106 deaths have been reported. You can read about the Coronavirus here.

As part of efforts to try to contain the virus, the Chinese government has placed multiple cities under quarantine and has promised to build more medical facilities to meet the growing demands of citizens. This is a drastic difference when compared to the 2003 SARS outbreak, where Chinese officials were accused of covering up major outbreaks on numerous occasions. Their efforts have since been acknowledged and have been praised by many, including the World Health Organization (WHO). However, multiple videos have surfaced over the weekend that puts their credibility at risk.

In one video, a woman in protective gear claiming to be a nurse located in Wuhan has revealed that there are in fact over 90000 infected, which is a far cry from the 2800 cases that China has reported. “I am here, to tell the truth,” the woman said in Mandarin. She proceeds to talk about the dire medical systems in China, in which the lack of medical supplies and resources are of utmost concern. 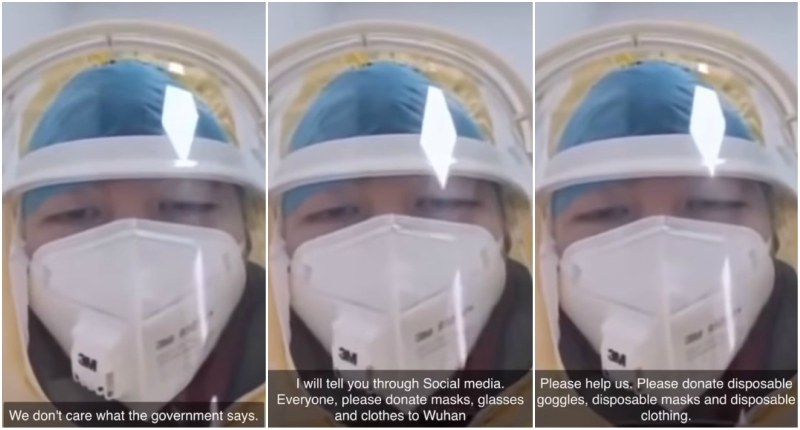 Later in the video, she warns citizens of China not to go out this Lunar New Year, urging everyone who watches this video to share it so everyone will have access to this vital information that has the potential of keeping many safe and healthy. She ends off the video by talking about how the Coronavirus is growing up to a secondary mutation.

What is a secondary mutation? In an article published by The Lancet, it is explained that as an RNA virus, 2019-nCoV still has the inherent feature of a high mutation rate, although like other coronaviruses the mutation rate might be somewhat lower than other RNA viruses because of its genome-encoded exonuclease. This aspect provides the possibility for this newly introduced zoonotic viral pathogen to adapt to become more efficiently transmitted from person to person and possibly become more virulent.

She highlights that if one person does not seek proper medical treatment, he or she can proceed to infect fourteen others, and those fourteen people will go on and infect another group of fourteen people each, and the vicious cycle goes on and on, ensuing irreversible damage.

Since the video has surfaced, family members of the deceased have claimed that “severe pneumonia” has been said to be the cause of death as opposed to the Coronavirus. The Chinese government has yet to comment on the alleged coverups.