The Spotify vs Apple Music debate rages ever on, but I have always loved Spotify because they have absolutely nailed their recommendations of new, lesser known music. I have discovered so many of my favourite bands and artists thanks to Spotify and their (kind of creepily) curated playlists. In order to share this gift with you, I have put together 5 fantastic albums I have discovered because of Spotify. 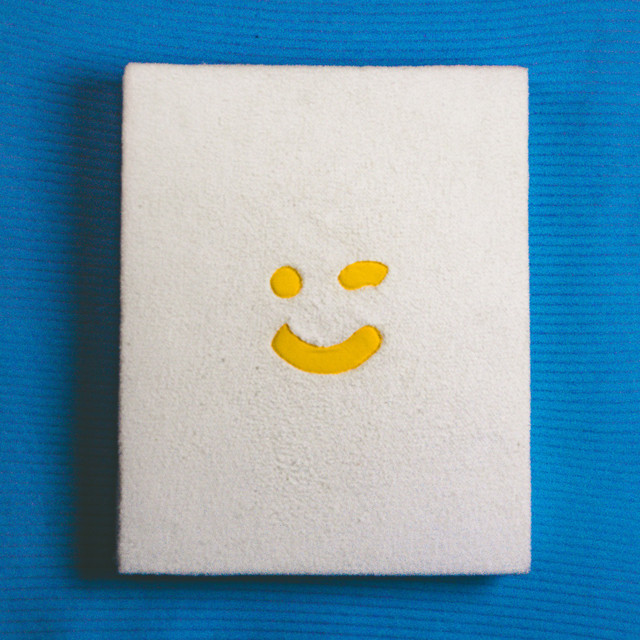 Indie pop duo Courtship. (yes the period is necessary) have created an album that’s both amazingly fresh while still feeling and sounding accessible. Each song is different and diverse while still maintaining the overall summertime vibes the album offers. The floating, dreamy synths contrast perfectly with funky basslines, groovy falsetto vocals and smart lyrics. Synth driven, danceable songs such as ‘Nice Guy’ and ‘Sunroof’ are perfectly palatable for the non-indie listener while still delighting the more hardcore fans. ‘Perfect People’ with its misfit message, muted instrumentals, and energetic beat makes any moment feel like the opening credits of an indie film set in Brooklyn or San Francisco. It’s short and sweet so every song feels essential to the album. The duo have managed to inject their charming, slightly rag-tag personalities into the LP, creating unpretentious, fresh, energetic and sunny tunes to soundtrack your summer (or your wintry daydreams about summer). It is just waiting for you to bust out at your next party or solo jam.

Featured Lyric: ‘Why so hard to be a nice guy?/Coulda had a nice life/Friendliness went out of style.’- ‘Nice Guy’ 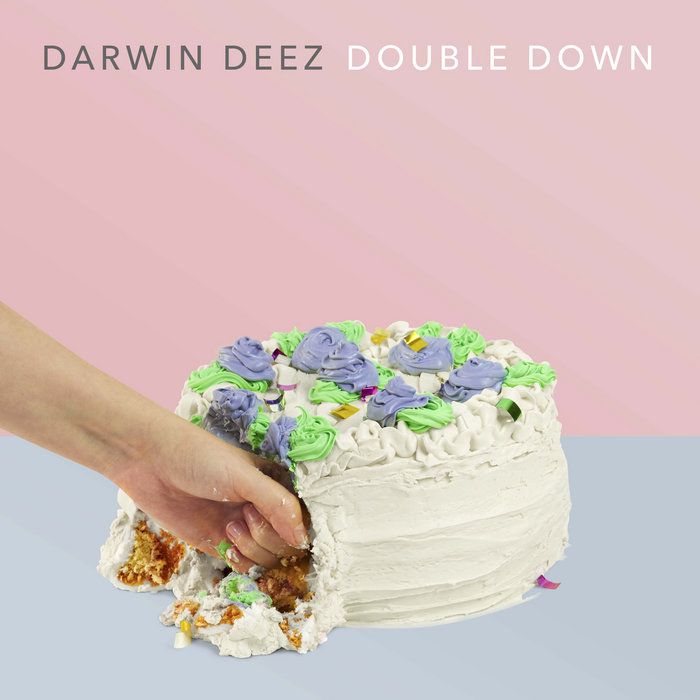 If I were to crown an indie pop king right here, right now, it would have to go to New Yorker Darwin Deez. This Brooklyn native makes music that ticks off every point on my checklist: Danceable tunes, distinctive guitar sound and clever, memorable lyrics. Double Down offers bluesy, laidback guitar on tracks like ‘Rated R’ and ‘The Other Side’ as well as tight, toe tapping riffs on ‘Lover’ and ‘Last Cigarette’. The mood on this album goes from sweet and romantic to irritated and sarcastic but Deez never loses the sincere, authentic voice imbued into all of his songs. ‘Double Down’ mixes bright, smooth indie pop with more hectic, frantic sounds reminiscent of his earlier albums. There is narrative embedded in each song, bringing the listener from cutting asides in tracks 3 and 8 to heartfelt, sweet sentiments in tracks 6 and 11. The whole album holds together well whether listened to from top to bottom or dipped in and out of as the occasion calls for.

Featured Lyric: ‘You only care about your hair/to you a mirror is a miracle/don’t even notice that i’m there/too busy checkin’ out your spherical’ -- ‘Lover’

The New York based band with a Welsh transplant lead, Drowners’ offers a slick post-punk, indie sound with strains of early Arctic Monkeys. Sure they’re not the most original band on the block, but the songs are filled with twangy guitar sounds, tight drums and endearingly earnest lyrics of jealousy, yearning and heartbreak. The songs are economical while still getting their message across with both sincere and tongue-in-cheek lyrics. ‘You’ve Got It Wrong’ and ‘Ways to Phrase a Rejection’ capture specific moments in time with lead Matt Hitt painting a picture for the listener where as tracks such as ‘Let Me Finish’ and ‘Luv, Hold Me Down’ capture feelings in more broad strokes. Either way, the whole album is a package deal of adolescent awkwardness, timeless feels, catchy guitar riffs and smart lyrics. Critics have turned their nose up at the album for its lack of fresh sounds or for feeling too reminiscent of earlier bands, but the sincerity and simplicity Drowners’ brings goes farther than you’d expect. It’s the kind of album it’s hard to stop listening to (or talking about).

Featured Lyric: ‘She's drinking down his laughter/And she don't half love a drink./For someone I never gave half a thought to/He don't half make me think.’ -- ‘You’ve Got It Wrong’

Like it’s otherworldly namesake, Ley Lines offers both dreamy, ethereal tracks as well as more energetic tunes making the listener feel and think in equal measure. The lyrics are relevant and smart, conveying feelings in neat, concise lines that are personal and universal. The tracks seamlessly flow into each other, giving the album a holistic feel and taking the listener on a sonic and emotional journey from beginning to end. The transition between ‘listen for you’ and ‘little light one’ is audial perfection, starting with slow, airy vocals and reassuring beat, the song gradually speeds up and warps to bring you to the more intense, earthy tones of ‘little light one’ which finds its own beat and assured vocals by the first verse. This again transforms into the expansive but still warm chorus, sharing the message of new beginnings and hope that the song perfectly encapsulates.

Tracks like ‘aiming low’ and ‘money’ maintain the free flowing feel of the album while switching it up to a slightly more intense guitar sound and pointed vocals. ‘aiming low’ feels like a real transition point late in the album. The lyrics have a darker, more embattled flavour compared to the more hopeful, optimistic feel of earlier tracks. However the band still manages to avoid sounding cynical and maintains it’s sincere, dreamy and charming sound throughout.

Featured Lyric: ‘I swear you move slow motion/Watching you looks like bending time/Catch me in your illusion/Helping me lose my mind’ -- ‘Slow Motion’ 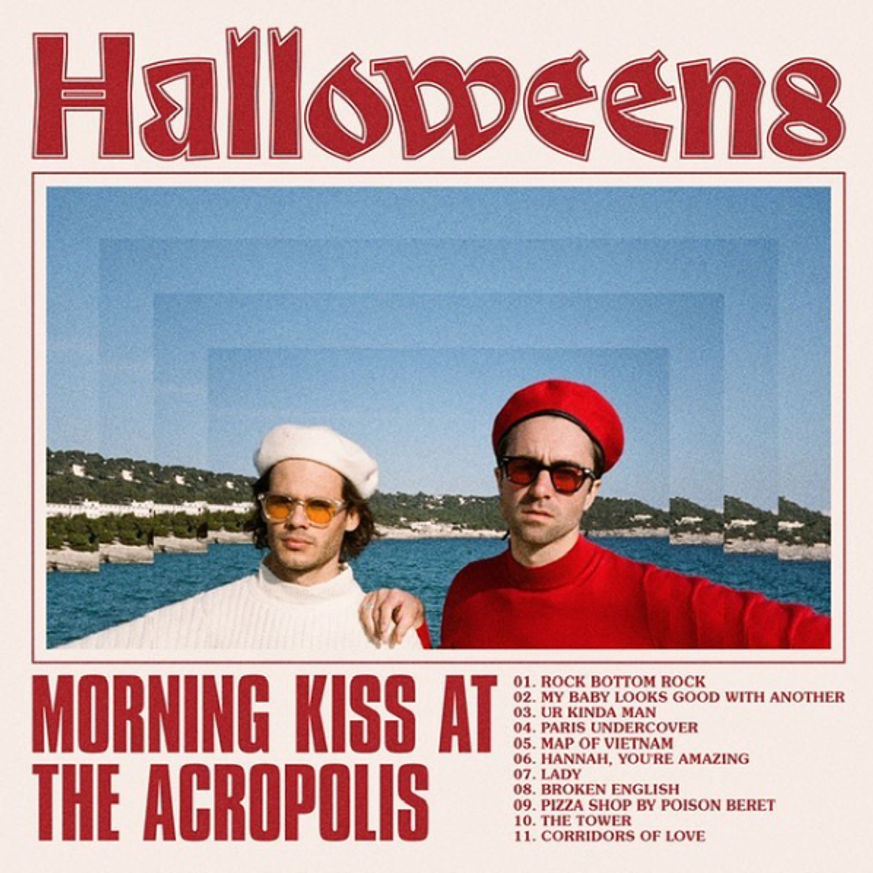 Morning Kiss at the Acropolis by Halloweens (2020)

Justin Hayward-Young and Timothy Lanham from The Vaccines have teamed up to bring us the gem that is Halloween’s debut album Morning Kiss at the Acropolis. With a decidedly retro feel, the duo manage to toe the line between cheesy and soulful with entertaining lyrics, big instrumentals and an undeniable sense of fun. Charming but not vapid, the album manages to transport the listener to another time and place where even heartbreak sounds good. ‘My Baby Looks Good With Another’ has an undeniably gloomy message yet the upbeat melody and vintage feel will have you moving your feet whether you like it or not. ‘Lady’ has strange lyrics (‘Letterman jacket, cowboy hat/Western suits in your London flat/Lemon popsicle, DVD/Two years into the other scene/Television, Richard Hell’) that somehow give the feeling you’re apart of some exclusive club while having a cheeky, laidback guitar riff and bouncing keyboards that make it stand out from its slower companions, the mournful ‘Broken English’ and mystifying, keyboard driven ‘Pizza Shop by Poison Beret’. The whole album stands out among the plethora of indie pop/rock albums with its strong retro flavour and streak of creativity marking it as an undeniable passion project.

Featured Lyric: ‘We DJed at the pizza shop/And just about survived the drop/But no one ordered rock and roll/With pineapple on top’ -- ‘Pizza Shop by Poison Beret’

Listen to it here.