On the 8th of February, an army official went of a killing spree around the northeastern region of Thailand. Nakhon Ratchasima Province, better known as Korat, was the unfortunate victim of the heinous acts perpetrated by 32-year-old Sergeant Major 1st Class Jakrapanth Thomma (จักรพันธ์ ถมมา). At least 25 people were killed and 42 others were wounded. 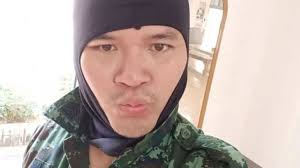 The shooting began at Surathampithak army camp when Thomma got into a heated argument with his commander. Thomma then stole Colonel Anantharot Krasae’s weapon before shooting him dead. Krasae’s mother-in-law, who was also on-site, was not spared either. Afterward, Thomma stole a Type 11 assault rifle and ammunition, killing a soldier in the process. He then stole a Humvee and wounded the driver. He managed to escape fully equipped and armed with the intent of causing destruction.

Before he arrived at Terminal 21, he shot at traffic and bystanders walking down the street. Upon his arrival at popular shopping destination Terminal 21, he opened fire at crowds and fired at a cooking gas cylinder, which caused an explosion. He held multiple people hostage and was still at large as of the 8th of February. 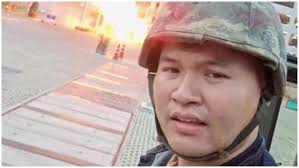 Photo obtained via Globe Intel
Photos of Jakrapanth Thomma posing for a selfie in front of an explosion he caused earlier on the 8th of February.

Thomma allegedly took selfies and live-streamed the entire shooting on Facebook. ”Our hearts go out to the victims, their families and the community affected by this tragedy in Thailand. There is no place on Facebook for people who commit this kind of atrocity, nor do we allow people to praise or support this attack,” a Facebook representative said in a statement. His account has since been deleted.

It has been reported by Thai media that the shooters mother was brought to the scene to try to convince her son to surrender. In a video that has been deleted, she could be seen visibly shaken and upset, crying while asking “why did he do it?”

The reason behind this attack is still unknown, although it has been widely speculated that he snapped due to issues with money. On February 9 at 9:22 local time, it was announced that the shooter was shot dead by Thai military officials.