(Warning: the following content may be distressing to some)

Even if we were not taught about tax calculation and how to pay the mortgage in high school, we were definetely taught about the Holocaust; a Jewish genocide that tragically resulted in the death of 6 million Jews.

The way people were murdered was just as horrific as the number of people killed. The concetration camps were dreadful, and prisoners were prone to starvation and deadly diseases. The most inhumane part (if I had to pick just one) was the idea of the extermination camps that was set up by the Nazis in 1942; specially-built poison gas chambers to kill people.

I remember thinking, when did humans become such monsters?

But the fact that the Holocaust took place from 1941 to 1945 gave me a tiny bit of hope for humanity. It can't happen again, right?

God, was I wrong.

As you are reading this with a sense of security and peace, millions of Muslims are being tortured in China’s “re-education” camps for Uighers, and very little people are aware. This state-sponsered genocide includes the largest mass detention of people since the Holocaust, with 130,000 Uighers dying every three months. This figure excludes children.

You're probably wondering, "Why have I never heard of it?"

That's because the Chinese government is doing everything to keep the program shrouded in secrecy.

Since 2017, at least three million have been interned in more than 100 indentified camps in Xinjiang, a Northwest region in China. For a long time, the Chinese government denied that these camps even existed. However, after images and proof began to emerge, the government acknowledged that these camps are "re-education" camps for Uighers.

Uighurs are an ethnic group originating from Central and East Asia.

12 million Uighurs, mostly Muslims, currently live in Xianjiang, China and are being targeted based on their culture, language, religion, and religious practices.

Millions of Muslims are imprisoned, interrogated, and tortured in these camps for abstaining from alcohol and cigarettes, having Whatsapp, going to a mosque, wearing a full beard, praying, fasting, listening to a religious lecture, wearing any clothes with religious iconography or arabic letters, and so much more. Here are some more things that can get an Uigher Muslim taken to a concentration camp: 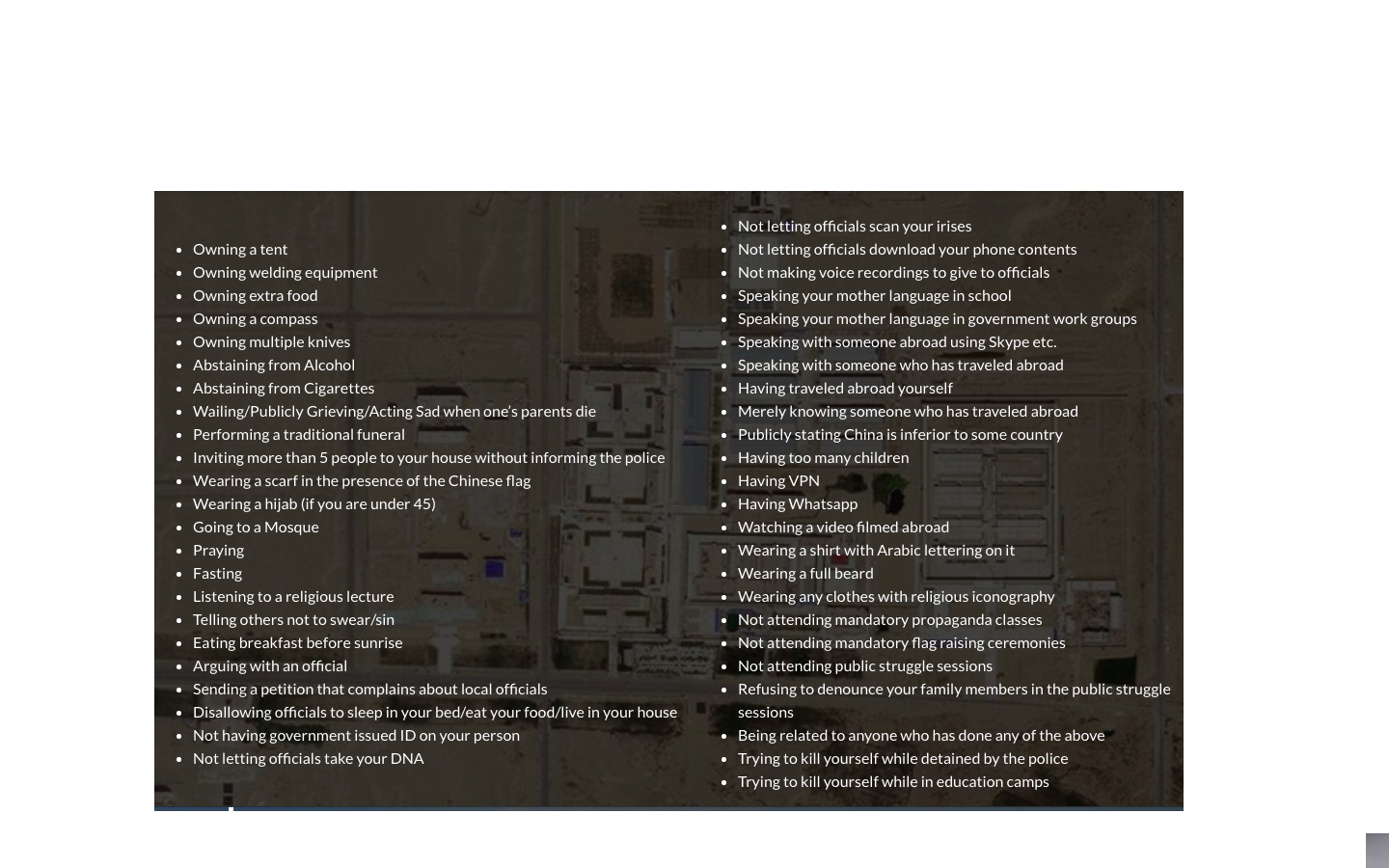 In 2013 and 2014, the Uigher millitants claimed responsibility for a number of attacks. China points to these attacks and claims that Uighers hold extremists views and are a threat to security. Their goal is to "re-educate" them through these camps.

However, the Muslim minority says otherwise, saying they were interned, not “re-educated.”

Uigher women in these concentration camps are being systematically raped, sexually abused, and tortured in horrific ways.

Tursunay Ziawudun, an Uigher, spent nine months inside China's network of internment camps. In an interview with the BBC news, she stated, "There were many people in those cells (containment rooms) who lost their minds."

Several women survivors who have managed to escape report being gang-raped by gaurds at the facilities. Some even during their teenage years.

It's sickening to know that sexual toture is very common in these internement camps.

"It's absolutely horrendous," Ziawudun says. "I felt I had died. I was dead."

The small crowded cells contain about 60 people at a time. It's so cramped that people take turns standing so that others are able to sleep for a couple of hours. And with so many people stuck in the same room, there are no toilets. Detainees have to use a bucket for excertion.

Along with that, detainees are forced medication such as pills and injections without being informed of the contents.

Reported by Ziawudun and other survivors, the "vaccine" brought numbness and nausea. The unknown medication causes some women and girls to faint, but other detainees have become so numb to the situation that it's too normal for them to care.

Other medications are forcibly administered to women that causes reproductive interference, leading to mass forced sterilization. This is done in order to supress the Uigher population. Along with this, Uigher children are brutally seperated from their families.

Uighurs detained in the camps are subjected to physical toture, including beatings, being tied to a hard chair all day long, and being electocuted in the most painful ways possible. Even women survivors have scars and marks all over their bodies from beatings and severe abuse.

If all of this isn't enough emotional torture, a mother reported that she was made to see her missing child from a distance briefly before both of them were dragged away by their hair.

Along the horrifying torture techniques (I can't even write them down) and the oppression of Muslim detainees, the severity of food deprivation makes survival even harder.

"You forget to think about life outside the camp. I don't know if they brainwashed us or if it was the side effect of the injections and pills, but you can't think of anything beyond wishing you had a full stomach. The food deprivation is so severe," says Ziawudun.

Along with the terrifying dehumanization, reports have also shown evidence of indocrination. Instead of the traditional "Allah Akbar" (God is Great) that Muslims say to praise God, Uigher Muslims are forced to chant "Communist Party Akbar." According to Ziawudun, detainees were forced to spend hours singing patriotic Chinese songs.

The "re-education" of this Muslim minority often ends in a painful deaths within the walls of these camps.

Everything I have included is only some of the torture that the Uigher camp detainees experience, and it's happening as you read this.

By now, you’re probably wondering, how did China even allow this to happen? Same here.

China's response to these detention camps in Xianjiang is simple. On November 24, 2019, Liu Xiaoming, a Chinese ambassador, denied that the detention camps existed and claimed that it's only a fabrication.

When asked about the camps, he responded:

“There's no so-called labour camps, they are what we call vocational, education and training centres. They are there for the prevention of terrorists.”

Isn't that what they said about the Holocaust?

He tried silencing millions of victims, the survivors who spoke out about their stories, and not to mention, images and reports that prove the existence of this horrendous genocide.

This chilling footage, due to being broadcast by BBC Panorama on Monday evening, was recorded prior to publication of the China Cables, a leak of what appear to be classified documents from within the Communist party:

The demolitions of mosques to supress religious freedom is not a lie. This gross human rights abuse and mass genocide is not a lie. Countries like the United Kingdom and Malaysia have cancelled $20 billion worth of projects that awarded Chinese companies because it's not a lie.

The US has labelled the "re-education" program as a genocide against the Uighers. According to internations convention, the definition of a genocide is the "intent to destroy, in whole or in part, a national, ethnical, racial or religious group".

Yes, it’s a mass genocide that’s happening this very instant. So then, why isn’t anyone speaking out?

According to what various reports suggest, China purposely keeps behind relatives and then interns them in these camps. This discourages those who leave from speaking out.

Despite this, many brave survivors like Ziawudun are bringing this issue to light and calling for attention. This genocide needs to be stopped before it's too late. We need to do it not only for Uighers, but also for the sake of humanity that's left in the world.

You and I are safe because our false sense of security gives us reassurance that the world is all rainbows.

But the big question is, how long will it stay that way? And will we be next?

There's a lot of uncertainty in that question, but right now we need to focus on saving the Uigher detainees from the horrifying camps in Xianjing. We need to take the steps necessary to make a change, and it starts with you.

How to take action to prevent the Uighur genocide from continuing:

You can do this by visiting this site (if you're American):

Issues that can be addressed and contact information is available on this site:

Nike. Adidas. Samsung. Amazon. These are some companies that have stopped selling products that were created by Uigher forced labour as a result of people speaking out on the issue. Check out this site and see if your favourite company is supporting the prevention of Uigher forced labour:

You can organize presentations and fundraisers, and use social media to amplify stories.

Our generation is exposed to social media, meaning there are a million ways to spread awareness. You can spread awareness by sharing this article with others, on your social media stories, along with this link that informs on more ways to take action:

Here's a small quote from the Washington Post Editorial:

“All who believe in the principle of “never again” after the horror of the Nazi extermination camps and Stalin’s gulag must speak up against China’s grotesque use of brainwashing, prisons, and toture”

I've done my part by speaking out.

Now, it's your turn.