“It's twelve noon in London, seven AM in Philadelphia, and around the world it's time for Live Aid.”
-Broadcaster Richard Skinner opening Live Aid concert

13 July 1985. Simultaneously at Wembley Stadium, London, UK and John F. Kennedy Stadium Philadelphia, US one of the largest satellite link-ups and television broadcasts of all time is about to begin.

Today marks the 36th anniversary of Live Aid and its worldwide effort to raise awareness and funds for relief of the 1983-1985 famine in Ethiopia. Slated as the “global jukebox”, Live Aid was a beneficial concert as well as a music-based fundraising initiative, originally organised by Bob Geldof. Other countries, including the Soviet Union, Canada, Japan, Yugoslavia, Austria, Australia, and West Germany, conducted concerts inspired by the proposal on the same day. The entire event was carried off with an estimated audience of 1.9 billion people watching the live broadcast from 150 countries, accounting for over 40% of the world's population.

The history of the event draws back a year, in Michael Buerk's BBC News coverage on the 1984 famine in Ethiopia, where images of hundreds of thousands of people starving to death were presented to the UK public. The BBC News team was the first to chronicle the starvation, with Buerk characterizing it as "a biblical famine in the twentieth century" and "the closest thing to hell on Earth" in his broadcast on October 23rd.

The people in the United Kingdom was shocked by the study, and money poured into relief organizations such as Save the Children, bringing international attention to the Ethiopian situation. Geldof, who was watching the news from his home in London, phoned Ure and the two swiftly collaborated on the song "Do They Know It's Christmas?" in the hopes of raising money for famine relief. The song was recorded on November 25, 1984, at Sarm West Studios in Notting Hill, London, and released four days later, remaining at number one in the UK for five weeks. The song went on to become the fastest-selling single in the UK, grossing £8 million. Geldof then set his sights on putting on a massive concert in order to raise even more money. And that is how Live Aid was born.

The concert began at 12:00 British Summer Time (BST) at Wembley Stadium and continued at John F. Kennedy Stadium starting at 13:51 BST. The Wembley performances ended at 22:00 BST while the JFK ones ended at 04:05 BST 14 July. Thus, the concert continued for just over 16 hours, but since many artists' performances were conducted simultaneously in the two stadiums, the total concert's length was much longer. Viewers were encouraged to give to the Live Aid charity throughout the shows. The BBC manned 300 phone lines so that members of the public could use their credit cards to make donations. Every twenty minutes, the phone number and an address to which viewers may send checks were repeated.

The particular event was also monumental for many of the participating artists individually. For Queen, while their performance was monumental, often referred to as the greatest live gig of all time, it was also in one of the rehearsals for the show that Freddie Mercury announced to his bandmates that he suffered from AIDS, making their appearance all more sentimental. Mercury danced out on stage, greeting the crowd as if they were his best friends, in the midst of a pessimistic atmosphere. He was the undisputed master of the stadium by the time he knelt down at the keyboard and played the first few notes of "Bohemian Rhapsody." Over their 21 minutes on stage, the crowd fell in love with his character and charisma as well as his four-octave voice. The only break came at the end of Mercury's performance of "Radio Ga Ga," which he did at the edge of the stage, pumping his sawn-off mic towards the audience. He led them in a vocal improvisation for just over 30 seconds, which became known as "the note heard around the world." The four members of the band, absent from their flamboyant 70s outfits, gave the performance of a lifetime.

However, the drama was not spared, neither on nor off the stage. Led Zeppelin performed for the first time since drummer John Bonham passed away in 1980. Phil Collins and Tony Thompson stood in for Bonham. Plant's scratchy voice, Jimmy Page's out-of-tune guitar, a lack of practice, and malfunctioning monitors were all cited as flaws in the performance, leading Plant to describe the performance as an atrocity. Led Zeppelin has blocked broadcasts of the performance and withheld permission for it to be included on the DVD release while many named it "one of the worst rock-and-roll reunions of all time."

Regardless, that day an abundance of world-known artists performed at these stadiums for a common cause. Performers like Black Sabbath, Sting, Paul McArtney, Bryan Adams, U2, David Bowie, Mick Jagger, Santana, Elton John, Madonna, Bob Dylan and Eric Clapton united their powers as well as the powers of the audience watching to raise funds and awareness for one of the worst crises in world history. Live Aid generated $127 million for African famine relief, and the exposure it created prompted Western countries to make extra grain available to solve the immediate hunger crisis in Africa. In the end, despite the many technical and social difficulties that arose before, during and even after the event, its main goal was met with success, making it one of the most influential and monumental musical and charity events ever organised, while giving us many iconic moments of international music history.

Reminiscing this event gives a bittersweet taste to everyone’s mouth, not only because of the nostalgia of certain artists or the experience of a concert that the pandemic has stripped us from, but also because of the cause that the event wanted to raise awareness for. That famine in Ethiopia might not be present to the same extent as it was in 1985, but hunger in African countries, as well as many other humanitarian crises are still prevailing, especially in these unusual times that we live in. Hopefully, an event of equal or more response may be organised in the future, possibly online now that concerts of that kind are easily accessible to everyone with an internet connection; but until then we should keep up with the problems the planet faces and try to make a small change as individuals. A small donation, volunteering or raising awareness can go a long way in the grand scheme of things. Let’s celebrate and honour the anniversary of Live Aid by continuing its mission and maintaining its impact through many more generations to come. 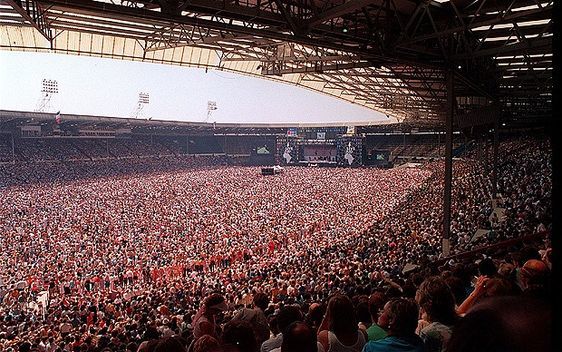