The indie game, “Journey”, has been out since 2012, and here’s why this stunning game is a life-changing experience. Don’t worry, I will not include any spoilers in this, so you can have the full experience if you decide to play!

With the recent quarantine, most people stuck at home have turned to their favorite entertainment devices to keep busy, and I am no different. Powering on my PlayStation 4, I fully expected to only spend a few hours casually gaming and having fun; I had no idea a video game was about to change my life.

“Journey” is a 2012 video game by Thatgamecompany and it was recently on sale, which is why I decided to purchase it. At first glance, the game seems very simplistic and childish – I thought to myself that there is no way a game where you run around in the sand will impact me in any way whatsoever. However, almost as soon as I started playing it, I realized how wrong I was – the very moment I picked up my controller, the poignant, beautiful soundtrack by Austin Wintory captivated me. I was glued to my screen from the soundtrack of the game, and that was only the beginning of the thrilling journey.

The game consists of several ‘chapters’; you play as an unnamed, robed figure and at the end of each chapter you get a glimpse into the past of the desolate world and how it came to be. Your goal is to reach the huge mountain in the distance, but it is very clear that you shouldn’t just focus on the destination – after all, the game is titled “Journey” for a reason; you learn to appreciate the journey itself and all your experiences more than the actual ending.

As well as this, you gain a scarf made of magical cloth that allows you to fly for short periods of time; in each chapter, you find several glowing symbols that increase the length of your scarf and, along with it, the period of time during which you can fly. You might also meet other players along the way and complete the journey with them, with your only form of communication being a series of sounds you can create. This only makes the game more mesmerizing, as you must physically show what you are going to do on the journey instead of simply saying it. In my opinion, this adds an even deeper meaning to the game, as it shows that companionship doesn’t have to rely on voicing your thoughts and feelings; instead, your actions mean just as much as the spoken word. I’m not the only one so captivated by this:

I rave about how what an amazing example Journey is for the kind of communication that can be achieved without words or language — but that day, I achieved this *without even sound* with a complete stranger. Just because we both loved this game so much.

Another striking aspect of the game is the scenery. The color and simplicity are what make the beautiful surroundings so striking; you cannot help but feel as though you really are there, taking in the sights of the deserted land. The glittering, golden sand adds a sense of peace and serene calmness to the game and while it might also give you a sense of loneliness, that loneliness is eventually trumped when you find another robed figure to help you. That is when you can truly appreciate the game, as the spectacular scenery draws you in more when you have someone alongside you to appreciate it with. 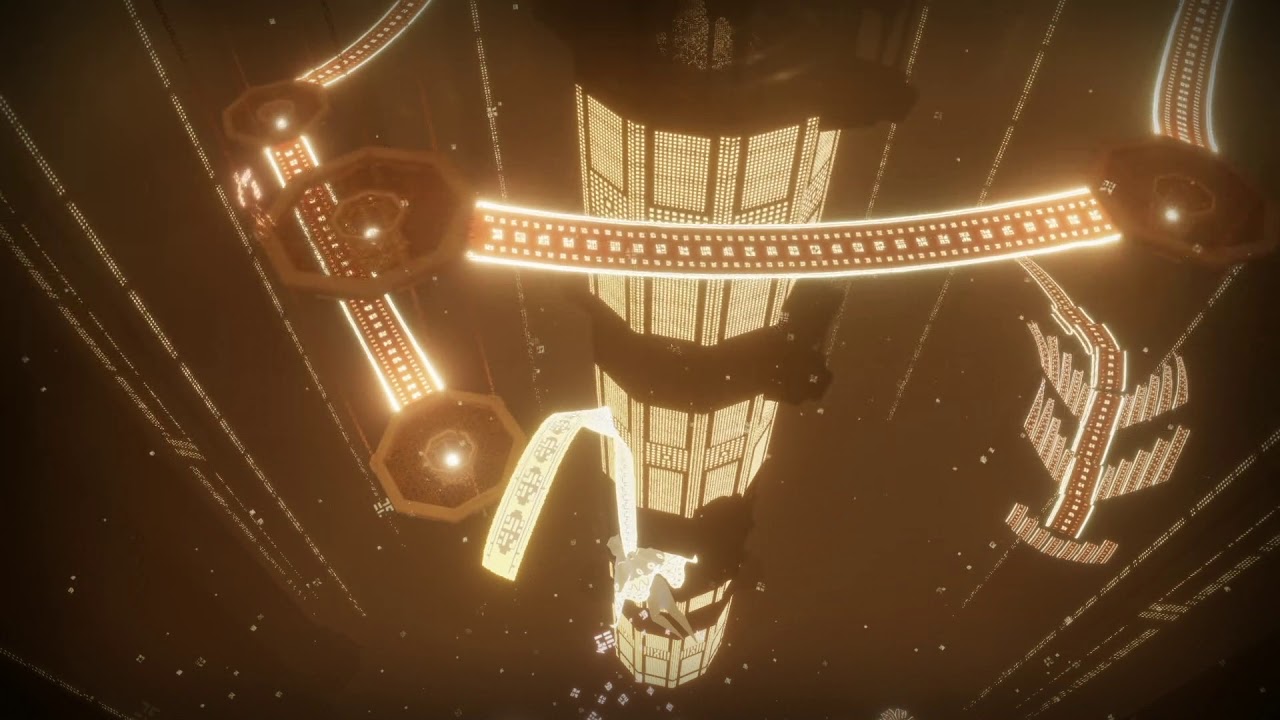 The straightforwardness of the game as well as the clear objective are what makes it work best. You know what you need to do, so you can relax and immerse yourself in the stunning world of “Journey”, taking in the sights and simply enjoying yourself. The passionate, moving soundtrack adds to the experience; particularly the last two tracks, “Apotheosis” and “I Was Born For This”. I will not lie – when I heard this music, it genuinely brought tears to my eyes. I cannot describe it with any words other than sheer perfection because that’s what it really is – a melodical masterpiece that will allow you to lose yourself completely in this beautiful world. (The other great part about this is the entire soundtrack is available on Spotify – a huge bonus for me!)

In all, the beauty of “Journey” is what really captivated me, and now I speak very highly of it every time it is brought up. I highly recommend this game, as I know I will play it many more times! There’s also a lot of Easter eggs and trophies to pick up while playing it, so definitely give it a go!