Franca Sozzani is a legend in the fashion industry; during her reign as editor-in-chief of Vogue Italia (1998-2016) the magazine gained the reputation of the most avant-garde of the Vogue magazines. She often used each issue as a means of discussing wider social, political and economic issues of the time. Because of this, the magazine was often shrouded in controversy but Sozzani, unfazed by the backlash, continually pushed past the purely aesthetic and commercial strictures fashion magazines tend to assume.

Some of her most notable issues include A Black Issue (July, 2008) which was dedicated to celebrating black women and black culture at a time when it was largely being ignored. Another one of her iconic issues is Makeover Madness (July, 2005). 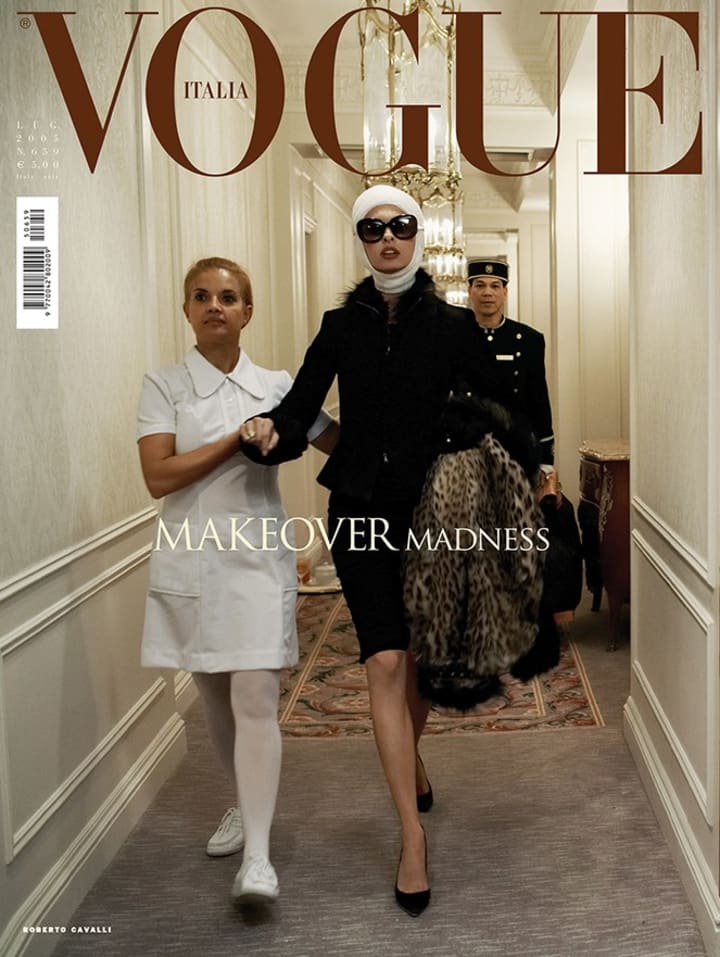 Sozzani was a big believer in the power of the image; how photographs can tell their own story. Unlike American Vogue for instance, which tends to inundate the reader with countless advertisements for whichever high-end product is trending that month, Vogue Italia centred each issue around the editorial photoshoots. The Makeover Madness issue included a 30-page spread photographed by Steven Meisel in attempt to start a discourse around plastic surgery (more specifically plastic surgery for purely aesthetic reasons and not out of medical necessity).

The issue suggests that we are no longer satisfied with simply owning the latest luxury fashion items but also want the ‘perfect body’ to match. It also notes that the cost of the procedures renders it accessible to only those with a considerable amount of privilege. The crux of the article identifies that no matter how successful these women are, they still tie their self-worth to their physical appearance.

While there are certainly many issues surrounding cosmetic surgery; the industry itself is underpinned by the notion that there is an ideal body type and our bodies can go in and out of trend, it is however contradictory for it to be criticised by Vogue. Fashion magazines are notorious for promoting an ‘ideal’ body type. Due to the heavy criticism they have received over the years they are slowly becoming more inclusive, but in the early 2000s this wasn’t the case. So it seems ironic to promote a singular standard of beauty and then shun those who didn’t happen to naturally meet the requirements and simply want to feel more confident in themselves? The problem is only exacerbated when the celebrities that grace the covers of these magazines deny procedures they have undergone, further perpetuating an unrealistic standard of beauty to their typically younger, impressionable audiences.

The reality is, it really isn’t anyone’s business what someone else decides to do with or to their own body. There is no sense in denying that pretty privilege exists and there are certain features (typically white, Eurocentric) that society deems more attractive than others. However, instead of focusing our attention on those who opt to alter themselves, perhaps we should focus on the undeniable misogynistic and racist ideals that are engrained into the way we view beauty. There shouldn’t be standards of beauty in the first place because there is no one singular definition, it differs from person to person and place to place. What we collectively need to remember is that the way we look is quite frankly the least interesting part about us.