New year, new me. That's the phrase most say at the beginning of the new year. Will I say that? No, not without added sarcasm tacked onto it. I was one of those basic people who said for resolutions they’d work out more or stop eating junk food. In my opinion, those kinds of resolutions are pretty much impossible to accomplish, I learned that by trying to do them for years but eventually I just did them in the middle of the year when starting your resolutions doesn't really count or matter.

I’m taking a different approach this year. At the end of every year I can never tell if it was a good year or not. I can’t remember if I had more good days over bad days. I have tried writing every day for a year once, that lasted maybe two weeks. I get bored of things easily and always need to switch things up when they’re the same for any given amount of time. I even have to change the creamer for my coffee when I haven’t even finished the bottle that was just bought a week or two ago. It’s hard to stick to the same thing for me. I guess that's the kind of commitment issues I have. Not to get too personal, but I do want to say in some aspect I have no problem with that in terms of a relationship. Outside of that I'm pretty terrible at following much of a routine where I need to commit to it.

For one New Year’s though, I made the resolution to stop drinking soda. That was 2018 and I still haven’t had even a sip of soda. My body sort of just rejects it now after not having it for a while. I do miss it sometimes when there’s a barbeque or a party, but after having gone so long without it I know I can’t go back to drinking it again.

With New Year's Eve, and all the celebrating, I was conflicted in drinking soda or not because in the end that's pretty much all there was to drink where I was. I do think it's a little annoying of me to tell people I don't drink soda because then they have to find something for me to drink. Although, I do find a lot more people drinking water and I drink it ninety percent of the time. The other ten is when I have coffee or juice for just a little flavor when I'm having a good day. The choice to stop drinking soda has helped in the way that I don't feel gross after a drink of it. I'm not saying you are gross if you do, but I for one did not like the feeling I got from it. Yes, it's good taste wise, but otherwise I can definitely live without it. I'll crave it sometimes and may question on whether I should have at least a sip but I know I'll never drink it again.

This year, going back to my point, I'll be working on my "commitment issues". For the new year, I’m not writing, per se, but something in that direction. It’s not going to be much but it’ll be enough to get me to stick to things for long periods of time. I'm starting super small. It would take me about a second or two before I go to bed to complete. It sounds stupid admitting it but it's me simply filling in for the day, deciding if it was good or bad. Like I said, sounds stupid but it's a way to work on committing to things and it's so small that I shouldn't have a problem with doing it everyday. Baby steps. Getting older I feel like I shouldn't have this kind of an issue anymore but I didn't think it was an actual problem until a couple years ago. When I'd quit things like my interest in playing basketball, hanging out with different people after only just met some, going off and on being a vegetarian for a few years, or even changing different beliefs and opinions, I didn't realize until now that it was all because I could never commit to one thing. Those examples may not seem like a problem but after realizing that I wasn't able to commit to anything as a kid or up until recently, it makes me question myself a lot.

Not being able to commit to even the smallest things made me question if something is wrong with me. Some things I'd commit to almost a year, others could last a week. I don't want the only thing I'm committed to being not drinking soda. I want to be committed to at least one thing that I enjoy and not because it makes me feel physically healthy but because it makes me emotionally happy.

That is my New Year's resolution, committing. I don't need more than one, one is enough. It'll be hard enough with just this, committing to commit to other things. I've said it so many times already that it's starting to not sound like a real word. Either way, I'll see how this goes and how long I can actually stay committed to something now that I put it out there to the public.

Happy New Year, here's to having the year you deserve. 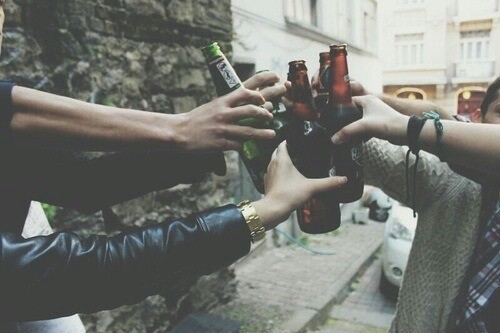