Resting Bitch face, alternatively known as bitchy resting face, is an epidemic. It’s the cold demeanour people give off when they don’t mean to at all. As its name suggests, resting bitch face is the angry, irritated, contemptuous, and mostly bitchy facial expression people wear when their face is relaxed. Despite their appearance, most people with this, aren’t feeling what they’re wearing.

And other people don’t really get it.

I mean, I, for one, have a resting bitch face. And despite me knowing that this thing totally exists, if I see another person with their brows always knitted, their eyes cold and withdrawn, and their lips curved downwards, I’m always going to be hesitant to approach them. Let alone sneak another glance at them.

It’s undeniable that resting bitch face builds up a barrier around those who have it. Like an extension of their personal bubble that warns people that getting too close is just going to make them feel bad and awkward. For someone like me, with the unlucky combination of resting bitch face and a highly introverted personality, that barrier serves as protection. And I feel safe in my bubble, as I’m sure many other people do. But what that does, or rather, what it did to me, was warp my social reputation. I’m known as the miserable and isolated girl that sits at the back and is too good to talk to anyone.

And although it stings, like a bitch, who am I kidding, I don’t do anything to fix it. I’m not miserable. I don’t like being isolated. And I don’t think I’m too good to talk to anyone, but that’s what my face tells people. That’s what my body language tells people, I put in no effort to fix peoples’ misconceptions about me because I’m in my personal bubble, feeling safe by myself. 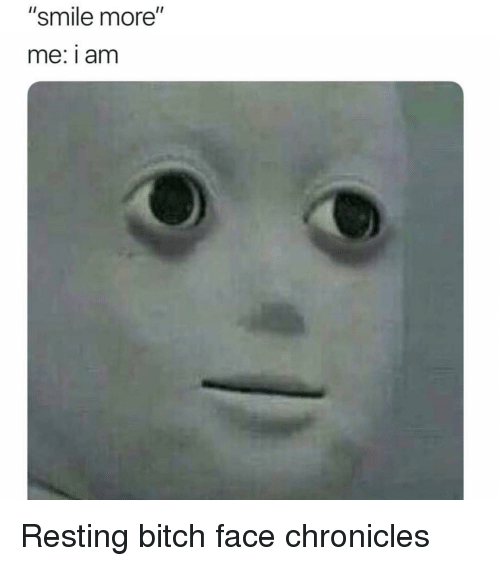 But let’s look at a hypothetical solution. How am I supposed to fix this cold demeanour of mine? How are any of you?

It seems obvious, but smiling more does work. Even if you think you look stupid when you smile. Even if you complain that smiling constantly is only going to creep people out and hurt your cheeks.

Initiating conversation is a good ice breaker. For me, people don’t expect to have a conversation with me, and if they did, they would expect it to be tight and unpleasant. But hey, for most of us, conversation isn’t always uncomfortable. We just need to get past the barrier of resting bitch face.