Somehow JK Rowling (aka Robert Galbraith) has become a controversial figure. I am not here to talk about that because I, personally, am sick to death of a debate that goes nowhere. However, I am more than happy to talk about the newest installment of her detective series, Troubled Blood which came out on the 15th of September. Before the release of the book, it had garnered attention as various different sources attacked it for being ‘transphobic’ or ‘controversial’ and, as I made progress with the book it became abundantly clear that these claims had come from people who hadn’t even read the book. This review may just be a drop in a very turbulent sea but if I can persuade at least one reader to give this series a try then I think it will have been worth it. 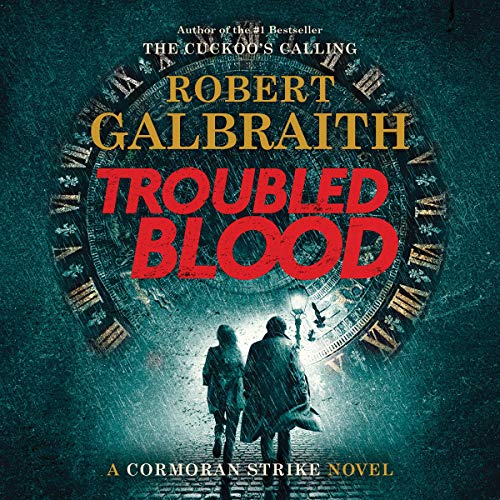 This fifth installment sees beloved detective duo Cormoran Strike, the hardened, one-legged veteran and his compassionate, clever business partner Robin Ellacott tackle their first cold case as they investigate a woman who has been missing for nearly forty years. The plot is complex and rich, full of colourful characters, intricate relationships and long buried secrets added to the increasingly messy personal lives of the two detectives. Dealing with divorce, death and their own unspoken feelings, Robin and Strike work against all odds to get to the bottom of what seems like a lost cause, culminating in more reveals than any of them bargained for.

Rowling is a master of character and relationship work, mastering the ‘will-they-won’t-they’ aspect of Strike and Robin while also revealing the growth they have gone through individually as well as how their relationship has developed over the past five books. Robin’s character growth is some of the best I have ever seen; She works through issues that, while she has a very specific situation, are universally relatable to young people, especially young women, everywhere. This is done, not through clumsy exposition but through Robin’s own thinking and reactions, making it feel natural and important to the story and to the reader.

Strike also, while considerably older than Robin, also faces growth and decisions relating to his family, his estranged, rockstar father and disturbed, volatile ex-fiancee. We see him in more diverse ways than ever before and are able to gain a more full appreciation of his character because of this. Add this to the elaborate mystery at the forefront of the plot and you have a twisted, rich story full of sensory and plot details that grip you and refuse to let go, even after you have finished. Almost all of the locations in the novel are real places and combined with her knack for specific details the novel really comes alive and draws the reader into the prose.

It’s a 926 page monster of a book and I finished in three days and immediately went back to the beginning to read it again and take it all in because there was just so much to absorb and I don’t think my first read did it the justice it deserves. Rarely has an author made such a seamless, skillful jump between genres and target audience. It is so clear that she enjoys writing these books and that they are not written to prove a point but because she is invested in the story and characters just as much as the readers are.

Now, I said I wasn’t going to address the controversy but that isn’t strictly true. I saw headlines claiming the moral of the story was ‘Never trust a man in a dress’ and that the story focused on a serial killer who dressed up as a woman to get close to his victims. Having read the book it’s obvious the authors of these articles haven’t actually read it; yes there is a serial killer who wore lipstick and a wig occasionally to get close to his victims however this is very obviously not the issue anyone has with the man and there is not even a hint at any of so-called transphobia people have condemned it for. Yes he wore lipstick occasionally but he also raped, tortured and murdered multiple women which, not to state the obvious, seems like a more important character detail and has no real relation to the wider plot.

All in all this is possibly the best installment of the series so far and showcases Rowling at the height of her storytelling powers. She balances masterful character work, intricate plotting, and immaculate atmosphere and setting to provide an entertaining, tense and thoughtful novel that will delight diehard fans and new converts alike.